Its Time to Believe Older Adults Too

TweetShare404Share33Email437 SharesIn a stunning move that has crystalized a culturally historic moment, Time magazine named its 2017 Person of the Year to be “The Silence Breakers,” courageous women and men who finally feel empowered enough to speak out about sexual harassment, a scourge that pervades every industry and corner of society. It’s way past time.Of course, it’s easy to say this and to ask what took so long for our culture to reach this tipping point. Yet the answer is startlingly simple: People are finally believing the victims’ stories. That’s no small milestone, especially since those who have experienced sexual harassment have been trying to make their cases for millennia and have either been ignored, discredited, intimidated, persecuted, or otherwise silenced. Not now. No more.Hopefully this turn of events will now precipitate similar tipping points for those who experience racism, ethnic/religious persecution, ableism, homophobia, and ageism. Harassers of any kind should be held accountable for their actions, whether seemingly innocuous (they never are) or downright violent.As we are learning through victims’ accounts, there’s a spectrum of abuse regarding harassment. Some people are forced to endure hearing demeaning jokes, being unfairly stereotyped, or depicted as lacking a sense of humor, while others are denied opportunities for career advancement or are violently assaulted. All of their stories need to be heard –– and believed.Which brings me to another social scourge: ageism. Just as we are encouraged to believe those who report experiences of sexual harassment, so, too, should we believe older adults who report elder harassment in any of its forms. Ageism, too, is a spectrum of abuse, one that can be illustrated by a three-tiered pyramid: 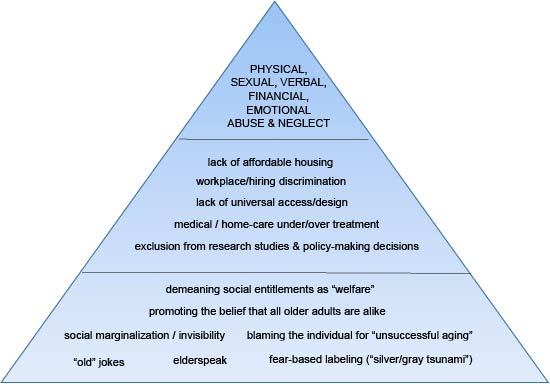 The bottom tier consists of the beliefs, attitudes, and everyday behaviors that form the foundation of ageism. Making older adults the subjects of ageist jokes; speaking to or about them as if they are feeble or children (also known as “elderspeak”); creating a sense of fear about older adults using up the world’s resources; blaming them as solely responsible if they are poor, sick, uneducated, or unemployed; failing to acknowledge their existence (let alone their viability); assuming that all old people think, act, and believe in the same way; and recasting social safety nets in politically negative terms –– these are destructive impulses without which none of the other forms of ageism would exist.The next higher tier comprises the social, political, and economic impacts of ageism upon older adults in their communities, workplaces, and healthcare settings. For example AARP reports that of the 1 in 5 American workers ages 55 and older, 64% have seen or experienced workplace discrimination. In addition, a sobering 2015 article published in the American Society on Aging’s journal Generations outlines the many forms medical ageism, while a study published in the same year in the Journal of General Internal Medicine reports that “One out of five adults over the age of 50 years experiences discrimination in healthcare settings.” Either they are under-treated (what I call the “Why bother?” syndrome) or they are over-treated (the “Keep them alive at all costs” syndrome). These examples, and many others from all sectors of society, illustrate the pervasive nature of harassment that older adults experience.The highest tier contains the most direct and personal extremes of harassment. Like sexual abuse, these experiences are traumatic and often go underreported by victims because of the fear of not being believed and/or of a resulting retaliation for speaking out. Often an older adult’s complaints may be dismissed as the ravings of an incompetent mind –– thus adding personal degradation to the process.All of this is to say that harassment in any form, toward any person, and for any reason should not be justified or tolerated. It should be stopped and the harasser held accountable. Equally important, the victim should be given a safe environment in which to report it and an opportunity to be believed. That should be the first step toward obliterating this destructive behavior.In the words of Justice Louis D. Brandeis, “Sunlight is said to be the best of disinfectants.” Time magazine has taken a historic step toward shining a light on sexual harassment by giving its victims a platform upon which to stand and speak. Since every one of us is aging and will most likely experience ageism at some time in our lives, let’s construct a platform of our own on which to stand and call out harassers. And let’s always make room for others to join us on that platform to tell their stories … and to be believed.Related PostsLet’s Be Gero-Guerrillas for ChangeI would like to see all of us embrace a militant approach toward abolishing ageism and its three insidious forms: discrimination, neglect, and abuse.It’s Time To “hiv” the Talk With Older AdultsIt’s time for a new sexual revolution for the Post War Generation — one where a real conversation about HIV/AIDS can start.Ageism . . . Not Just for Grown-upsSitting in a local coffee shop, I recently overheard a couple of women talking about ageism and the havoc it wreaks on older people. But then, almost in the same breath, the focus of the conversation shifted to teenagers today.TweetShare404Share33Email437 SharesTags: Ageism elder abuse elderspeak